Elden Ring: What we expect in the DLC

Elden Ring has been released for four months now and has achieved impressive results in the commercial field. But for loyal fans of Elden Ring, at this stage, their most anticipated next move is to see what FromSoftware will add to Elden Ring. Although the official has not given accurate information, according to Soulsborne's release practice, the release of DLC may be around October.

Players are eagerly looking forward to the DLC, and the fan community is always talking about this topic. A crazy fan even said that he will beat Malenia once a day before the official release of the DLC, and he had been doing this for two weeks. Many players are using their way to convey to the official their desire to see the DLC sooner.

This is the case because fans have a lot of expectations in the Elden Ring DLC, and players expect to experience the new things both in terms of storyline and gameplay.

Referring to the previous FromSoftware game DLC, they often introduce new areas, and these newly designed levels and scenes are undoubtedly a pleasure for players who have already cleared the base game. 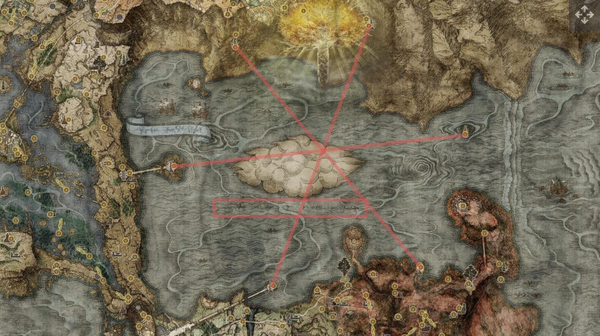 Luckily, there's a fair guess here, and in The Lands Between map, the ocean around the land is depicted as obscured by clouds or fog. Given that the cloud is in the center of the six towers, with blurry text underneath, this is most likely a new area that will be unlocked in the DLC.

Miqueella is probably the most mysterious character in the entire Elden Ring, although he's been mentioned several times. We don't know why he continued to sleep in the cocoon, exactly what role he played in Night of the Black Knives, how he would affect the story, etc. In short, as the twin brother of the strongest boss Malenia, he has too many mysteries.

Game mechanics are always a key factor in the gaming experience, so players expect to see new and improved features in the Elden Ring DLC. Especially in the cooperative mode, which has always been highly requested, summoning helpers is not what players want to see in PvP multiplayer games. I hope that more cooperative games of team copy mode can be introduced in DLC.

IGGM.com will keep you informed about the Elden Ring DLC to bring you first-hand information. While we can't have fun with DLC just yet, it's good to focus on the present. You can also get Elden Ring Runes here to advance the game and get 5% off with code "CSCCA".