For example, only Horde players can get the Horde Expedition reputation grind and rewards. There is a huge and formidable Horde fortress in the Borean Tundra, which is their base of operations. What's more, they also have a Quartermaster without a tabard.

Throughout Northrend, the Horde forces split into four distinct branches. These four branches together form the Horde Expedition. Among them, the Warsong Offensive headquartered in Warsong Hold is the leader of the Horde Expedition. The Horde leaders of this force are Garrosh Hellscream and Overlord Saurfang. Here are the four forces:

1. The Hand of Vengeance. This force is composed of the Forsaken and is concentrated in the eastern part of the continent.

2. The Sunreavers. This force is composed of Blood Elf forces and is concentrated near the Wrathgate. Their enemies are chiefly the Lich King and the Scourge.

3. The Tanuka. Due to the local bison people allied with Tauren, the troops are spread all over Northrend. Specifically, they are found mainly in the Borean Tundra, Dragonblight, and Grizzly Hills.

4. The Warsong Offensive. This force is mainly composed of the Orc forces and is located in Warsong Hold in the Borean Tundra. Here, you'll also find the Horde Expedition Quartermaster. 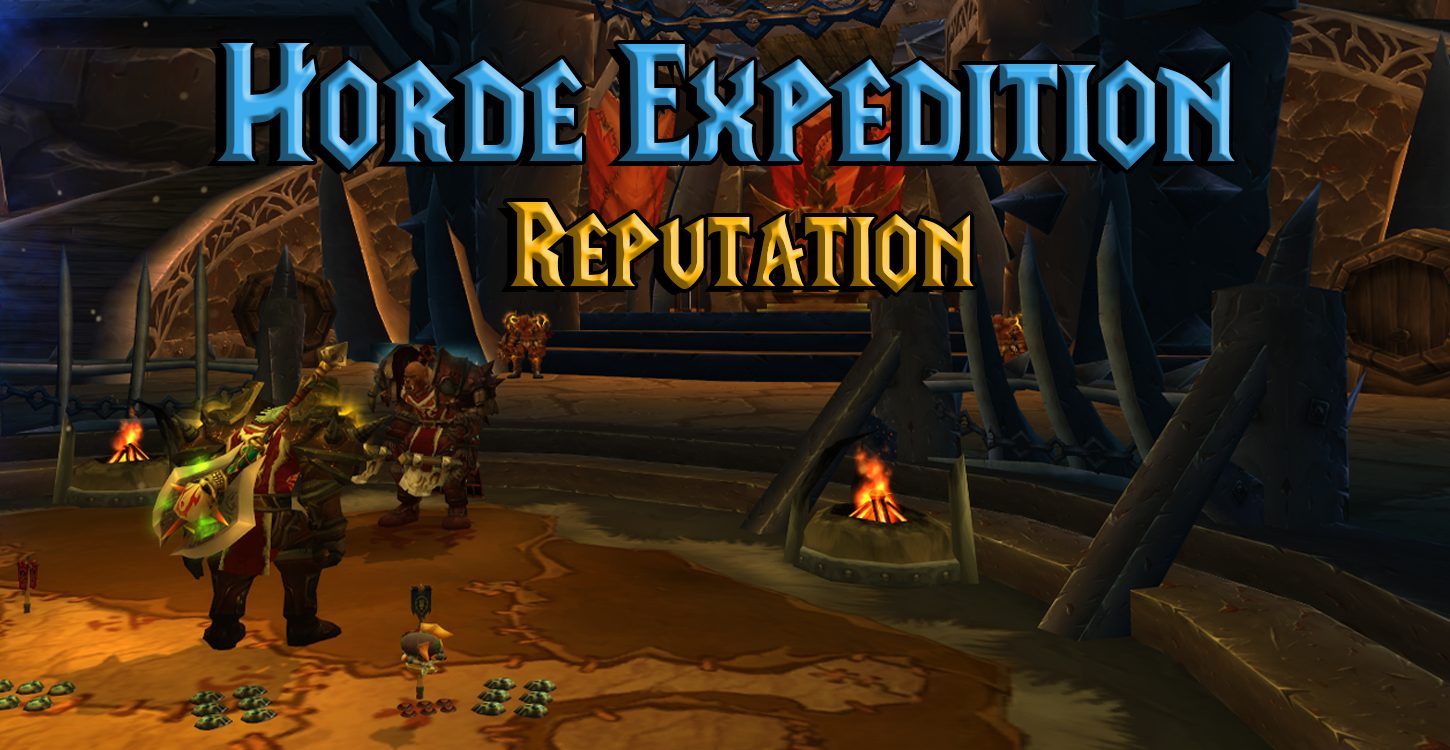 Gara Skullcrush is the Horde Expedition Quartermaster. Like the Profession trainers, she is also located on the second floor of Warsong Hold.

If you arrived at Warsong Hold by zeppelin or wyvern, you can take the elevator all the way down and walk to the opposite side of the room to find her. If you're coming in through the front door, you'll need to walk up the ramps behind Garrosh Hellscream and Overlord Saurfang. These ramps lead to the elevator and to Gara's location on the second floor.

Most players achieve Exalted in the Horde Expedition without knowing it, with the exception of Blacksmiths and Engineers. Because they keep an eye on the recipe's Reputation bars as they complete their tasks.

Regardless of faction, the best and most effective way to grind reputation is to run dungeons in your faction's tabard. However the Horde expedition is an exception. Since they don't have tabards, they gain HE standing for every mob they kill as long as they don't run the dungeon wearing a tabard representing another faction.

Due to the relatively simple quests for Horde players, the Horde Expedition's gear and weapon rewards are basically mediocre and have no BiS rewards. They'll still have some solid blue items though, as well as a very coveted purple item. The following are the specific rewards:

That's all for this guide. If you are interested in such news, you may wish to pay attention to this website first. Here, we will update the news and guides of various games in real time. In addition, you can also buy WOTLK Classic Gold here. You know, in WotLK Classic, gold has always been the best choice for leveling, fighting monsters, and obtaining equipment. Hurry up and act now!

Next: What You Can Do In New World Brimstone Sands Region?
Previous: IGGM: Anti-Counterfeiting Statement (Updated On January 2023)