As a free-to-play game, in Star Trek Online you can spend tons of money buying different ships, however there are still many different ways to acquire decent ships, and some of them are very good, completely for free, just via playing the game. So today I'm going to talk about the methods to get them for beginners.

Firstly let's start with talking about the Dilithium Exchange, so before we get into this, many have said the Dilithium Exchange is broken, but I think it is just not work as good as it used to in terms of the exchange rate and the time. I guess it depends on your opinion, if that's broken to you then it's broken, but it still does work for most of people, just takes much longer. Though you get a lot less bang for bucks than you did in the past, but if you're new just starting and you're putting lots of time in it, you can still take advantage of this, and be able to get yourself zen at no cost. 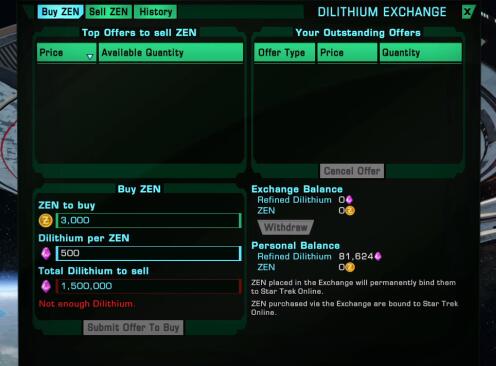 If you don't know what the Dilithium Exchange is, look at your Resources or Asset tab, you'll see you have Dilithium with options. And if you click on Exchange, you can actually post a listing here for Zen. so essentially this in-game resource that you can accumulate by playing, that is actually exchangeable for Zen which is basically one of your currency. So if you wanted to just buy something from the cash shop, you would use your your actual currency and buy Zen. With Zen you would buy stuff from the cash shop. Creating about three characters and using this method, just after months you would be able to buy yourself a ship from the cash shop. So that is one way, and it's probably the most tedious.

Next one that we're going to talk about the Exchange, so if you go to any of your main social zones and go to the Exchange, just search T6 you'll see there is a ton of T6 ships listed on there, they are going to be Lobi ships, Lock Box ship etc. They're going to start you at around 300 million STO PS4/PC/Xbox Energy Credits, which is a pretty good chunk, depend on your platforms. But again, if you have the time on your hands, and you want to put it in,  once a day on three characters, it would take you about 100 days to get enough Energy Credits.

There is one more good method for new players, keep following STO official Twitter and other social media accounts, there are always some activities that offer free decent rewards, which can make your T6 ships grinding process more easier than before.

If you want to know more about the STO updates and best place to buy Cheap STO Master Key, IGGM can be the best site for you, do miss it.